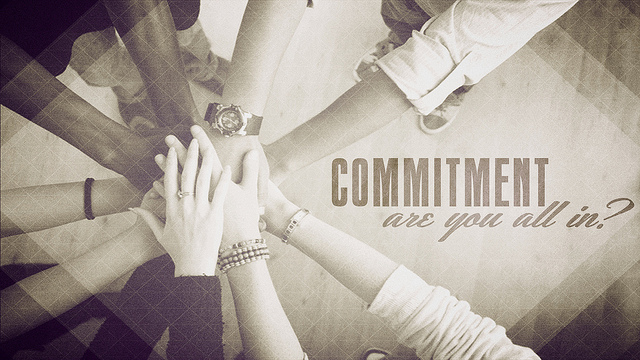 In several surveys, most “Christian” people readily confess their belief in God. However, the ground reality in our churches shows that the same people do not necessarily have a commitment to the Lordship of Jesus Christ or to his church. For many, a Christian faith sans commitment of any sort appears to be a viable option today. However, one needs to ask if such an option is even available to a follower of Christ. Could one claim to believe in Jesus’ Lordship and to be his follower without a firm commitment to the demands of the gospel?

Once, when Jesus healed a deaf person, his adversaries accused him of doing such ‘magical tricks’ through Satan’s help. Jesus, realizing this to be a spiritual battle, responded:

“Every kingdom divided against itself becomes a desert, and house falls on house. 18 If Satan also is divided against himself, how will his kingdom stand? —for you say that I cast out the demons by Beelzebul…..
20 But if it is by the finger of God that I cast out the demons, then the kingdom of God has come to you. 21 When a strong man, fully armed, guards his castle, his property is safe. 22 But when one stronger than he attacks him and overpowers him, he takes away his armor in which he trusted and divides his plunder. 23 Whoever is not with me is against me, and whoever does not gather with me scatters” (Luke 11: 17-23).

Thus, Jesus declares that he and his Kingdom are in a spiritual battle. Obviously, in such a battle, there is no room for neutrality. Whoever enlists with Jesus in fighting the spiritual battle cannot sit on the fence, because the demands Jesus makes are total and exclusive. For instance, Jesus says:

“If any want to become my followers, let them deny themselves and take up their cross and follow me” (Matthew 16: 24).
“Whoever comes to me and does not hate father and mother, wife and children, brothers and sisters, yes, and even life itself, cannot be my disciple” (Luke 14: 26).

Obviously, Jesus does not wish that we literally hate our parents or cease to care for them. Nevertheless, he demands that our commitment to him and to the Kingdom be so strong that all our other attachments appear as hatred in comparison. Furthermore, the exclusive “I am” claims of Christ throughout the Gospels and the apostolic teachings of the church also reflect such demands on us. These claims of complete commitment may sound too demanding in today’s context of “broadmindedness;” however, without them our faith does not make any sense. Without such commitment, the Apostles would not have suffered cruel martyrdom, I would not have come to faith in Christ, and you would not be reading it today. Let us pause and think were we stand today. Could you remain indifferent or neutral after Jesus confronts you with his claims and demands upon you? Jesus says:

May we be wise enough to make an unwavering commitment to Jesus Christ and to apply the first saying to ourselves and the second one to others! Amen.